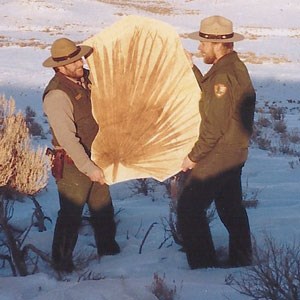 The National Park System contains a magnificent record of geologic time because rocks from each period of the geologic time scale are preserved in park landscapes. No single park has rocks from every geologic period, though some come close.

With the help of clocks, calendars, and appointment books, we organize our lives around time. We divide time into years, months, weeks, and days. Likewise, geologists created the geologic time scale to organize Earth’s history into eons, eras, periods, and epochs. While a human life spans decades, geologic time spans all of Earth’s history—4,600 million years!

Geologists used fundamental concepts to understand the chronological order of rocks around the world. It wasn’t until the advent of radiometric age dating techniques in the middle 1900s that reliable dates could be assigned to the previously named geologic time divisions.

The time scale is divided into four large periods of time—the Cenozoic Era, Mesozoic Era, Paleozoic Era, and The Precambrian.

The Cenozoic Era (66 million years ago through today) is the "Age of Mammals." Birds and mammals rose in prominence after the extinction of giant reptiles. Common Cenozoic fossils include cat-like carnivores and early horses, as well as ice age fossils like wooly mammoths. Caves can preserve the remains of ice-age animals that died in them or were transported there after death.

Do you want to see answer or more ?
Yes No
James 1 year ago
4